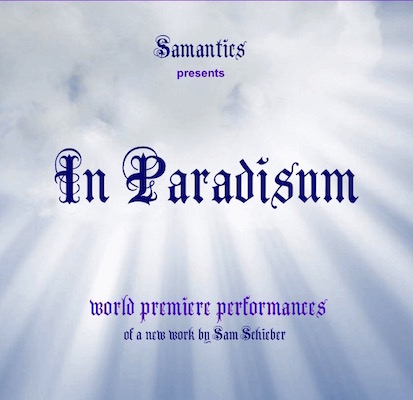 Samantics presents In Paradisum, a World Premiere Performance of a new work by Sam Schieber with 35 voices of Samantics Choir featuring Kate Campbell as a guest soloist.

Samantics Choir, and well-known soloists drawn from Sacramento, the Bay area, Nashville and D.C., will premiere an original choral work composed by Sam Schieber, Director of Samantics. Sam calls upon his lifelong experience with a wide variety of choral and solo writing to construct a work that showcases the unique talents of the Samantics Choir. True to all Samantics programs, this is guaranteed to be like no other concert experience!

The score, by Samantics Director, Sam Schieber, sets texts drawn from the traditional Requiem liturgy, the Psalms and the poems of George Herbert. In keeping with the subject matter, the piece will be mostly serious—but you can also count on a few Samantics touches!